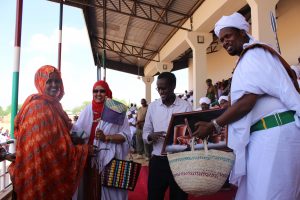 Mandera Somali Cultural Festival was a three day cultural fete of its kind in Mandera County. The festival was happening for the first time ever. 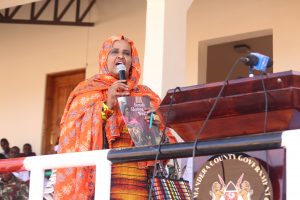 The festival saw many people from different counties converge at the Moi Stadium in Mandera County to celebrate and embrace the rich Somali culture. The Festival was attended by prominent leaders across the country. In attendance was the Mandera County leadership under H.E Gv. Ali Roba. Awjama Cultural Centre was represented at the Festival on its closing ceremony. The Center’s founder Fardowsa Jama, thanked .H.E.  Governor Ali Roba and his leadership for putting up such a cultural fete. In company of one of Awjama’s Cultural Center board member  Mr.Mohammed Hassan, She then gifted the governor with some of the Artistic work made by the youth, women and deaf community at Awjama. The Governor in return congratulated the Awjama Cultural Center for the wonderful work its doing in preserving the Somali Culture and also running a library where the Youth can gather and read. 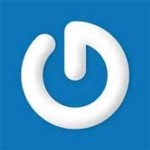 AWJAMA CULTURAL CENTRE
Somali Heritage Week 2018
Who We Are

The program targets woman and youth in the community by providing them with the platform aimed at enhancing the entrepreneurship skills for purpose of sustainable development.